Posted on September 15, 2017 by lindaibbotson

“Paris opened like a book under my skin,
‘A Moveable Feast’ Hemingway once said….”

Opening line from my poem ‘Pastiche,’ one of a sequence of poems entitled
‘The Paris Sketchbook’ published in Levure Litteraire 13.  http://levurelitteraire.com/linda-ibbotson-2/

Ernest Hemingway described, so succinctly, Paris as ‘A Moveable Feast’ and spent much of his time in the vibrant bohemian Latin Quarter in the company of the Avant-Garde such as T S Eliot, F Scott Fitzgerald, Gertrude Stein, James Joyce, Dali and Picasso, escaping momentarily the cold, often uncomfortable conditions in which they lived, to eat and write in the warmth of cafés such as La Closerie des Lilas, Les Deux Magots and Brasserie Lipp.

I followed in their footsteps, strolling the boulevards as a flaneur, frequenting the literary haunts, browsing the plethora of books in Shakespere and Company where I attended a poetry event Celebrating Fifty Years of Modern Poetry in Translation in August 2016.

Antonia and myself at the Paris Ritz

It was wonderful meeting Antonia Alexandra Klimenko, my companion and guide on several occasions. An accomplished and charismatic poet, Antonia’s artistry juxtaposes her powerful voice with the tender and the raw as well as infusing the spiritual. I was fascinated by her personal experiences of Paris including meeting George Whitman and Salvadore Dali! We indulged in afternoon tea at the luxurious Paris Ritz Proust room and picnicked in Square René Viviani  sipping apple juice, overlooking Notre Dame before attending SpokenWord Paris’ open mic at Au Chat Noir. As Writer/Poet in Residence for SWP, Antonia books the special guest each week. It was exciting for me to revisit with our mutual friend Danielle Baraka in April 2017 who travelled to Paris to meet us.

Antonia. trained as an actress at the American Conservatory Theater in San Francisco and a former San Francisco Poetry Slam Champion has recently had the pleasure of reading with the multi-talented Helene Cardona;  poet, actress, (including ‘Chocolat’ and ‘Mumford’) and translator among her many accolades and poet and translator, John High, at the Tennessee Bar. ‘Poets Live’ is hosted by Malik Crumpler.

Links to some of Antonia’s publications, regular poetry events and venues at the end of this article. 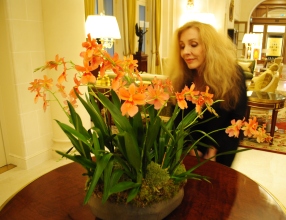 Orchids at the Paris Ritz

Antonia Alexandra Klimenko is widely published. Her work has appeared in  XXI Century World Literature (in which she represents France) The Poet”s Quest for God Anthology, CounterPunch, The Original Van Gogh’s Ear Anthology, The Rumpus, Levure Litteraire, Big Bridge,Writing for Peace, Strangers in Paris, Occupy Poets’ Anthology (in which she is distinguished as an American Poet), Maintenant : Journal of Contemporary Dada Writing and Art archived at the Smithsonian Institution in Washington, D.C. and New York’s Museum of Modern Art. She is the Writer/Poet in Residence for SpokenWord Paris.

What brought you to Paris, city of writers, artists and musicians?

My brother. I hadn’t seen him since I was 11 years old and, finally, I was 19 and old enough to travel. I was grateful that he had chosen Paris, as Paris had always been at the top of my short list of places that I had longed to visit, and for the usual reasons— the light, the architecture, the culture, the community of artists.  The notion that even if you made but a modest living, you might enjoy the abundance of beauty and spirit.  I like to think, also, that it was fate.

Which is your favorite café/ Parisian haunt?

For outdoor haunts:  There’s a place at the river’s edge on the Isle Saint Louis that I am very fond of. Also, the Jardin du Luxembourg.  Indoor: The light tiled Moroccan patio of Salon de The de La Grande Mosquee on sunny days, the shaded room of La Palette on rainy.

What motivates you to write and your influences?

The desire to transcend. To share and/or reflect beauty. To heal, to process an experience that might have been less than wonderful and to create positive energy from it. To connect with self and with others, to share thoughts and ideals which make us most human.  Writing encourages empathy as we imagine what it must be like to be in someone else’s shoes. I also enjoy the art of expression, trying to find the better messenger to convey meaning.  Poetry, like music, opens a portal to the mystery of understanding without our fully comprehending.  It brings me closer to Spirit.

And, of course, you never know who you might meet along the way. For instance, I was invited to a rather surreal soiree here in Paris where I couldn’t help but notice a charismatic artist with jet-black hair {and an unreasonably wide but charming moustache) wearing a satin pirate shirt topped off by a small leashed monkey sitting on his shoulder. He spoke to me towards the end of the evening. Told me he had noticed me…that I shouldn’t smile too much…that a woman must be mysterious.  Our brief meeting inspired me—years later– to write ‘’One evening, stand on the sky and learn to paint your world without a wooden frame. Then, climb into the painting.’’

Writers you admire and who influence your own poetic style?

I admire Michael Rothenberg, of 100 Thousand Poets for Change as a Living Poem.  He reached out to me when he heard I was ill and suggested I apply for a grant to Poets in Need, which I gratefully received. He reminds us that communion, communication and community can effect change and transformation in the world. As for writing style—Dostoyevsky, Rilke, e.e. cummings, Anne Sexton, James Wright.

What is your favorite line from one of your poems?

This is like Sophie’s Choice haha, as all of our creations are like our children.  Ok, if I must…

And, still the soul’s marrow

moves through and beyond

the fading bruise of my existence

Your goals and aspirations?

To get my collections of poems published. To finish my play, which I’m afraid is all play and no work right now. I had an opportunity to be published by the legendary Tambimuttu of Poetry London.  I even made a recording for him under the Apple Record label as he had gone into business with The Beatles at the tail-end of the 70’s.  The magazine was then called Poetry London / Apple Magazine. However, I decided I wanted to delay the publication in order to offer, perhaps, more inspired work and when Tambi died the manuscript was orphaned.  I only began to submit my work to journals in the last 7 years.  Now, as I approach 70, I do sincerely wish to find good homes for my poetic offspring.  I suppose it might help, haha,  if I sent them out into the world.

Of Papa Who Sang in the Opera

the dream you almost recall

One day you are writing to yourself

to prove that you exist

the next day you are talking to someone

How to talk to oneself

is a language all its own—

a message behind distorted glass

with the swell of the crumbling cork–

the skewed tongue that no longer fits

translating myself into a another language—

Translations are at best

Impressionists– every one of them—

always the colors just a little off

In the wee green hours of the marnin’

In the pale blue hours of the morning

I weave forth and back  back and forth

doing a poor imitation of me-self—

cutting a rug set in its own pattern

without a thread of light to add to my design

Today I received a letter in the mail—

no words  only a blank page in an envelope—

a crooked stamp in the corner—

reaching for the real thing—100 proof—

stumbling off the tongue…

I always read my poems sober

I always write my poems drunk

Originally published in The Bastille

It took me forever to learn how to love–

to love wide open with the throat singing arias

with the heart bleeding flesh

with the entrails leaking

with that profound wound of womanhood

that waits for you like a bruised ripening hunger

that weeps for you as you enter me without a sound

without you  With the lights off and the television on–

Afraid that you will   see the silent movies in my eyes

Afraid that you will   study my veins like roadmaps

that stretch across the sagging accordion of my ribs

into the rolling hills  the deep divide of my conscious being

that you will mistake my matching carry-on luggage

to that land of used dreams without me

In your mind   I am merely a reflection of you–

a mirror with a memory that unfolds now in slow motion

only after you’ve pulled out of the tunnel

and already left the station  The voice that–

just before you switch the channel–

knows how to love you with its mouth wide-open

and screams faster than you can say fast forward:

I gave you my body…now I want it back! 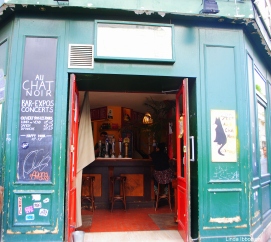 Tell us about SpokenWord Paris and other events/venues, particularly for English language speakers

In the words of David Barne’s its founder: SpokenWord Paris is one pole of a nomadic tribe of people who love poetry, writing and song. A home for creatives and lost anglophones. We do an open mic night called SpokenWord every Monday and an allied writers’ workshop at Shakespeare & Company (every Sunday.) We do a literary journal called The Bastille and Tightrope Books has published many of us in the book “Strangers in Paris.”

Venues with featured guests only and varying schedule

Links to some of Antonia’s publications.

This was an exhilarating and informative interview and I thank Antonia immensely for her interesting, thoughtful responses and her skillful poetic virtuosity. Thank you all for taking the time to read it.

I now ruminate as to whether writers were born with ink in their veins!

Antonia on the train – Maximillian Scheuer

Antonia at the Ritz and SpokenWord – My photo’s

This entry was posted in Uncategorized. Bookmark the permalink.